Question from LA Weekly Magazine: Who has better culinary options, vampires or werewolves? 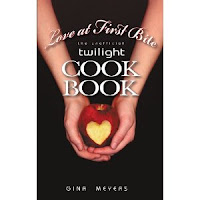 2. Who do you think has better culinary options, vampires or werewolves?

Well, since vampires don’t eat, werewolves would seem to have better culinary options. In Love at First Bite, I make sure there are plenty of Team Jacob culinary treats, such as Werewolf Chow, Wolf pack Waffles, and Jacob Black’s Grilled Cheese Sandwich. Sprinkled in Love at First Bite, are food quotes from the Twilight Saga books. Edward says, “I wasn’t hunting for food. I was actually trying my hand at, tracking. I’m not very good at it.” For that quote I have an Irritated Grizzly Bear Steak recipe. I also have for the Team Edward fans, I Dare You To Eat Pizza, Edward, Butterscotch Eyes (Bella says Edward’s eyes are the color butterscotch, it is a dessert with butterscotch pudding and little teddy grahams), as well as Vampire Blood Punch, and Edward’s Thirst Quencher.
Posted by Gina Meyers at 2:28 PM