Why I wrote Love at First Bite, The Unofficial Twilight Cookbook

Why I wrote Love at First Bite, The Unofficial Twilight Cookbook
Gina Meyers 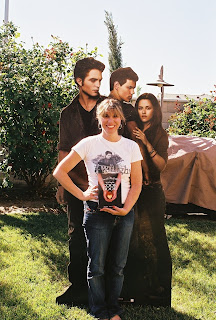 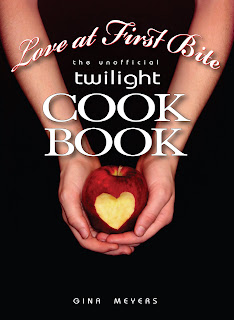 On November 21, 2008, my life changed. That was the night my friend had an extra ticket and invited me to the midnight showing of Twilight. Instantly, I  noticed how the movie premier was striking a chord with many different ages and generations, even men were at the premier donning Twilight inspired tee-shirts.  Before watching the movie, the only exposure to Twilight I had was knowing that my teenage stepdaughter had requested the entire collection of the Twilight Series of books by Stefanie Meyer and that they were in her closet on her bookshelf. I honestly thought the books were about vampires and werewolves, little did I know. After watching the movie, I saw it was a love story. Basically, I ran to my stepdaughters’ upstairs bedroom and took Twilight off her bookshelf and went to my bedroom and started to read it. It took me about three days to read Twilight.


While I was reading Twilight, it literally just came upon me, why not write a cookbook based upon the book? This thought didn’t seem odd in the slightest. While reading, I took notes every time there was a food reference. This took more time than the initial three days to read the book. For me, food is love and seven and a half years ago, I set a goal: to reignite a passion for cooking and getting people of all ages back together having meaningful conversations. This personal goal has continued to thrive in my life and the lives of others and still is my personal goal.


As a writer, I also realized that the Twilight series had a similar tone to what I like writing about, a love story with a twist.


The love story with a twist, is that we are all slightly different, but it is in the sacrifice where we can find true love and our true selves.


As I saw the story, a human girl, pasty and white, leaves her mom and stepdad to go hang out with her semi-recluse dad, Charlie Swan, Police Chief, in the rainiest place on the planet, Forks, Washington.


As the story goes, Stefanie Meyer had a brilliant dream which later became the Twilight book. She referenced the “rainiest place in the U.S.”  via the Google search engine to locate Forks. For me, a cookbook author, the name “Forks” couldn’t be more appetizing. The setting couldn’t be more appealing, the setting was chosen so the human, werewolves, and vampires could have a place to co-exist.


What about those vampires? Well, The Cullen Clan was a breed all their own, “vegetarian vampires”, preferring to consider themselves more civilized than the ordinary run of the mill blood sucking vampire, preferring to only suck the blood from animals. Well surely I wasn’t going to use real blood in my recipes, that’s totally disgusting and this wasn’t a “joke cookbook”, this was a “novelty cookbook” and so I opted to play upon the whole vegetarian vampire thing and made a slew of vegetarian inspired dishes. Some vegetarian dishes in Love at First Bite are:  Yellow Squash and Tomato Parmesan, Salad a la Cullen, Artichoke Cheese Squares. As for the werewolves, they feasted, so I did a hearty Wolfpack Waffles. During the holidays, my daughters’ Lauren and Makenna always made this dessert with Chex cereal, melted chocolate chips and peanut butter. I added powdered sugar to the concoction and renamed it Werewolf Chow. 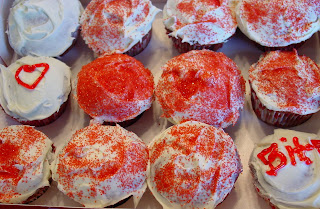 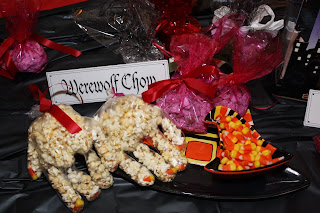 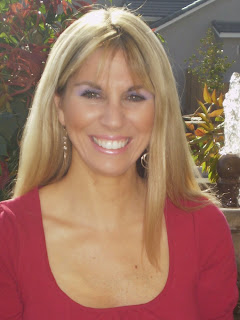 Then I experimented with red velvet cakes and created some semi-homemade recipes. Charlie, Bella’s dad wasn’t much of a gourmand, he was a divorced bachelor. My mom used to joke that my dad only knew how to make a “dinner in a skillet”, which consisted of sliced hot dogs, sliced potatoes, and diced onion, so I renamed it, “Charlie’s Dinner In A Skillet”.


There was a reference to an apple to signify original sin how Eve tempted Adam in the Garden of Eden, so in keeping with the theme, I did “sinfully” delicious apple recipes. I also researched the different type of apples and there are many different varieties to choose from. The cookbook has a three fork designation as well. “Three Forks” recipes are the most difficult, “two forks” means they are “medium” level of difficulty and “one fork” are the easiest recipes in the cookbook. I also did a play upon Edward’s eyes being the color butterscotch, with “Butterscotch Eyes”, a butterscotch pudding recipe with teddy grahams.


On their first date, Bella orders Mushroom Ravioli, so there is a Mushroom Ravioli recipe. Bella, aka, Isabella Swan is Italian. So being part Italian myself, I utilized a lot of family recipes in the Chow Bella Italian Food Section, including Bell’s Lasagna, Chicken Cacciatore, Veal Scaloppini, Tallerina (my late Great Aunt Rose’s recipe) and many more. For the Biscotti dessert, I used my Grandma Julie’s Biscotti cookie recipe, a family favorite.


How I came up with the title Love at First Bite. It felt as if I instantly thought of it (and no, I hadn’t heard of the movie of the same moniker) , however, one day I was looking through the picture album of my daughters’ 3rd grade Halloween party. I was in charge of teaching the kids to make Monster Hands. You pop popcorn, use a clear clean plastic glove, take five or so candy corns and place the candy corns as fingernails in each slot of the plastic glove, then you add cooled popcorn and use a ribbon or twisty tie and it looks like a hand. Anyways, as I looked at the picture, I noticed that I was wearing a Halloween inspired Orange tee-shirt with the words, Love at First Bite in black.


Vampires are known to “suck” or “bite” us and we “chew,” and “bite” our food. No other title could have worked as well as Love at First Bite to me.


On this Twilight journey, I have had book signings all over the United States, Baton Rouge, Louisiana, Memphis, Tennessee, Cleveland, Ohio, Fresno, California, San Jose, California, and many other wonderful cities. I have done live cooking demonstrations on TV all over the United States. In 2012, I was presented with The Gourmand International Award for Best Fundraising Cookbook in the World. While in Paris, France, I met a woman who was in charge of The Culinary Institute of America. She also was a Marketing Professor and she told me that she had utilized my book, Love at First Bite to show her student’s an example of an  innovator who took a great idea and ran with it.


Much to my delight, they mentioned my Twilight Cookbook on the hit TV Show, The Office. A pregnant Pam is talking with Kevin Malone and Kevin says, “I cooked my way through the Julia Child’s Cookbook, I am half way through the Twilight Cookbook, last night I  cooked Edward Cullen’s Cornflake Chicken.” The LA Times wrote an expose on my life and appeasing the haters. A dude on Amazon was starting a Twilight war stating my Team Edward Tacos caused his girlfriend to “break up with him”.  Fun stuff like that, I don’t have a Taco recipe in Love at First Bite. The Calgary Herald featured my Twilight Cookbook and many reporters came up with super fun titles for their articles: my personal favorite, “Running All The Way To The Bank, The Twilight franchise now has a Twilight Cookbook!”

The friends of the Visalia Library, cooked their way through my Twilight Cookbook and had a special evening with me. And, by far, the biggest compliment was when The Allan Carr Chatty Man TV Show (out of London, England) met up with the stars from Twilight, they featured my cookbook and served the stars of Twilight my Twilight Tribute Punch. Kellan Lutz, also known as Emmett Cullen went nuts over my Twilight Tribute Punch, secret ingredient, gummy worms. I modified my late Great Aunt Mildred’s punch recipe by adding the gummy worms.  Allan Carr agreed to pay me 1 pound which is equivalent to $1.00 U.S. dollar, I’m still waiting.  No worries, the experiences have been priceless.
Purchase The Twilight Cookbook
Posted by Gina Meyers at 1:29 PM