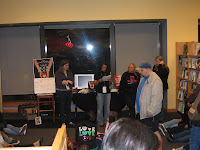 A special thanks to the Borders on Santana Row in San Jose, California for hosting a truly Twilightful event. What a wonderful experience to be a part of the Twilight Festivities. April, Amanda, and Dan all put on a fun Twilight party, treating the crowd to a round of Baseball. The group of over 50 participants was divided into two groups, with very tough trivia questions with the answers being either 1) from the book, or 2)from the movie. The Twilight fan club really couldn't be stumped. We were treated to snacks of banana chocolate chip muffin samples, ghiradelli chocolate, and winners of the raffle received a 5x7 photo of various scenes from the Twilight movie. After a brief intermission, I hosted an easy Twilight trivia contest, from my book, Love AT First Bite, The Unofficial Twilight Cookbook. I also read the introduction from the book and called on the audience for the answers to the trivia questions. The earlier contest was geared to a more sophisticated teen to adult crowd, meaning the trivia was tough. My questions helped the younger crowd to feel a part of the festivities. Including Jacob, a seven year old who wanted me to guess him name. I guessed Edward, sorry Jacob! We watched a very brief "hello" from the stars of the Twilight movie. After the contests (there was a planned Scavenger hunt that I will post,(I have the coveted hunt question, yippie that there wasn't time for), I was available for photos, autographs, and questions about the recipes found in Love At First Bite. The Borders Event took place close to the cafe upstairs and downstairs was even more packed by midnight with more Twilighters coming to just purchase the DVD. Borders handed out tickets and called numbers. Over 150 people were downstairs picking up any and all Twilight merchandise including Sweatheart Twilight Candy, posters, my cookbook, and of course, what we all came for, the Twilight on DVD. Me and my daughter Lauren left at about 12:30am, without a Twilight DVD, but it was very nice to see the younger girls, age 8 first in line for the DVD, as it was a late fun night and wonderful experience. A special shout out to Virgina, how wore a tee shirt emblazoned with, "Twilight Mom" and all the sweet teenagers who have so many wonderful suggestions, ideas, and things going on in their lives. Thanks for making this author feel like a Star! Oh, and the crowd thought it was very cute my last name being Meyers. "Hey, is your sis Stephenie Meyer they shouted?"
Posted by Gina Meyers at 8:18 PM